Quick Bio: Aileen here, I’m from Co. Kerry and work for Tourism Ireland in Amsterdam. I love cooking, travelling and cycling – I own five bikes, and it’s still not enough! I love getting back home to fresh mountain air and my mother’s brown bread. @aileenverykeen 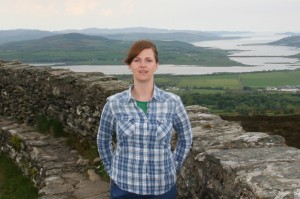 On top of An Grianán Aileach, Co. Donegal

One of the most noticeable changes I’ve…

Quick Bio: Aileen here, I’m from Co. Kerry and work for Tourism Ireland in Amsterdam. I love cooking, travelling and cycling – I own five bikes, and it’s still not enough! I love getting back home to fresh mountain air and my mother’s brown bread. @aileenverykeen

On top of An Grianán Aileach, Co. Donegal

One of the most noticeable changes I’ve seen on my trips back home in recent years is the number of cyclists you see. On city streets and on country roads, the humble bike is becoming part of the fabric of people’s everyday lives whether for commuting, leisure or sporting reasons. It brings to mind Flann O’Brien’s observation in The Third Policeman: “The gross and net result of it is that people who spent most of their natural lives riding iron bicycles over the rocky roadsteads of this parish get their personalities mixed up with the personalities of their bicycle as a result of the interchanging of the atoms of each of them and you would be surprised at the number of people in these parts who are nearly half people and half bicycles…”

I’ve chosen some of my favourite cycles in Ireland here. The routes are well marked, traffic-free in the main and will give you the chance to spend a few hours in Ireland’s countryside at your own pace. You won’t have any problem renting a bike for any of these routes, and each can be shortened or extended to suit your energy levels.

The Greenway from Westport to Achill, Co Mayo

Following the route of the old Westport to Achill railway (which closed in 1937), you’ll be treated to the longest off-road walking and cycling trail in Ireland. It’s also mercifully flat (well, trains don’t usually go up hills do they?) allowing you to enjoy the varied features on the trail – villages, mountains, sea views, forest and bogland. The route can be completed in one go, or choose a section punctuated by the villages of Mulranny and Newport. I tackled the Mulranny to Achill Island section with some friends this summer and we’ve been raving about it ever since. Wide expanses of sky, sea and stress free cycling – a perfect summer afternoon. 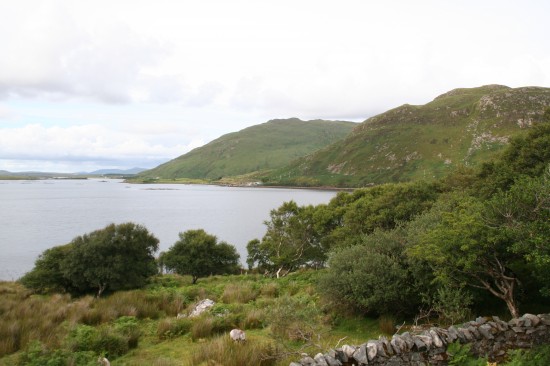 Slea Head, Co. Kerry
One of the finest coastal drives in Ireland, this 40km circular route takes you west from Dingle town around a stunning peninsula, dotted with white beaches, monastic sites and small villages. It’s possible to do it all in one day, but you won’t regret spending a night on the peninsula – the starlit stroll home from the pub was one of the highlights for me. Get the trip off to the right start by picking up your bike in the inimitable Foxy John’s in Dingle – you’ll pass the bar counter on your left and the hardware counter on your right as you make your way to the bikes at the back! 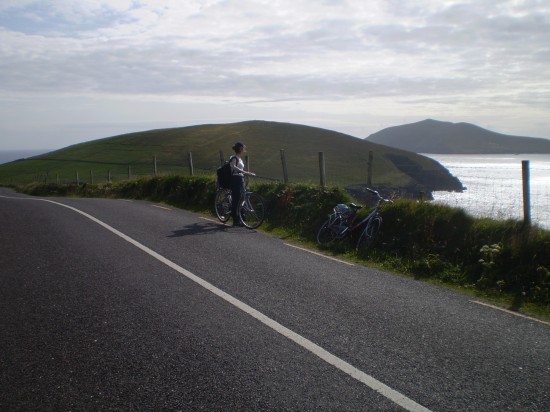 Taking it all in at Slea Head Co.Kerry

Inis Eoghan Cycleway, Co. Londonderry and Co. Donegal
Taking in two counties, the route connects the River Foyle in County Londonderry to Lough Swilly in Donegal. More than one third of the route is traffic free, and the remainder is along quieter country roads. It’s worth the climb up to An Grianán Aileach where the stunning views takes in Lough Swilly, Inch Island, the Inis Eoghain Peninsula and the Sperrin Mountains. An Grianán is a stone circle temple that dates back to circa 1,700 BC. Pick up your bike in the city of Derry-Londonderry and follow the route anti-clockwise. You’ll be rewarded on your return with a flat traffic-free path that follows the line of the former Great Northern Railway, called the Foyle Valley Greenway.

A holiday for me isn’t complete until I’ve picked up a bike and map. On two wheels you have a great vantage point to take in your surroundings through all your senses, and in glorious 3D and full colour surround sound. When you’re on a bike you’re not just observing the scene, you’re in the scene. It’s easy to see why Ireland is enjoy a cycling renaissance – just beware of those that have exchanged a few too many atoms with their bicycles, as Flann O’Brien goes on to warn us: “when a man lets things go so far that he is more than half a bicycle, you will not see him so much because he spends a lot of his time leaning with one elbow on walls or standing propped by one foot at kerbstones.”

Tourism Ireland Copyright © 2012
This feed is for use only on registered Tourism Ireland websites.
The use of this feed on other websites breaches copyright. If this content is not in your news reader, it makes the page you are viewing an infringement of the copyright.
(85.13.139.154)