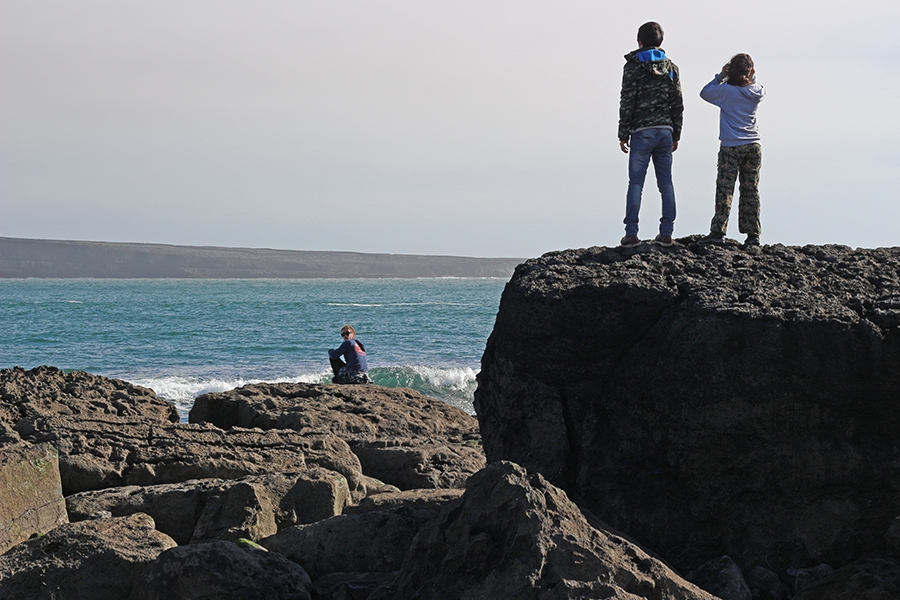 The Aran Islands landscape makes an ideal setting for walkers of all levels. It is relatively flat although there are some relatively modest higher points so one can can get a good vantage of the entire Island. It is a good idea to wear strong shoes if you are venturing towards the cliff face areas as the terrain is rocky or gravel. There are few signposted parts of the island where one needs to walk such as the Blackfort which is about 30 minutes walk from Kilronan Village and is more or less a flat walk.

St Benans church is a little further out past Kileney village and is about ten minutes walk up a small hill. Many people walk from the Black Fort along the cliffs to the bottom point of the Island which takes about an hour, and then around 40 minutes walk back to Kilronan Village. Other walks include venturing up to the lighthouse which is the highest point of the Island. Here you can get a very good view of the Islands. Many people then walk towards the centre of the island and back down to Kilronan. This particular walk is not signposted and is a matter of following the roads.

Another suggested walk is to walk down towards the wormhole when at Dun Aonghasa. This is a walk along the cliff-edge and presents dramatic views. The Worm Hole has recently become more popular since it has become a venue for the Red Bull Cliff diving competition. If one were to do a walked loop of the entire island it would probably take an entire day (roughly 16km ) as the island is 8km long.

Walking on the Aran Islands is one of the most popular activities. With miles and miles of small thin roads criss crossing each other most people just venture out and explore. However for those who wish to cover the islands distinct features, there are a few suggestions that will cover almost everything. The island is not well signposted so make sure you print this page. Its also important to mention to wear strong shoes as the surface is not entirely flat.

This walk starts at the main village of Kilronan.The first port of call is the Black Fort which will take around twenty minutes to get to. If you are waiting a few hours for the boat then this would be an excellent prelude to a trip. From the village, follow the road south. Then turn right at the beach adjacent to the fishing port. You now will be walking towards the other side of the island which is about 800 metres wide. Once over the slightest rise there are wide degrees of open fields covered in rock and the view is most unique and powerful.

The sight of the fort is in view the whole way so its just a matter of walking towards it. People have been known to spend a whole day relaxing here, many have gone for an afternoon sleep and certainly everybody leaves it having it in the “wow factor” category.

Walking towards the Puffing holes: Walking towards the puffing holes at the complete bottom of the island is a walk of majestic isolation and complete intrigue as the landscape of Inis Mor completely unravels itself. This walk is an adventurous one as there is no path. Its just a matter of walking south along the cliffs and paddocks where you will see giant boulders and idiosyncratic stone fences. The closer you get to the bottom of the island around 30-45 minutes, the closer you will get to the waves from the Atlantic as they crash into the rocks. This has a strong ocean roar and is a dramatic sight. Once at the bottom of the island you will come across the Puffing holes. These are holes in the ground at the top of the cliffs and have tunnel like channels that lead down to the water. On days when the seas are rampant, water will rush up and create a spray on the mainland in a similar fashion to the puffing of a whale. If you look further south you see the island of Inis Meain and the cliffs where Synge got his inspiration to write his famous plays.

Walking back to the Village If you follow the natural line of the islands southern tip around , the view of the main village of Kilronan will come into sight once again. This is about 40 mins to an hour to get to walking. but there’s a lot to see on the way. Including three isolated beautifully clean beaches.

Teaghlach Éinne( St. Enda’s Household) This is in reference to the graveyard which has a peculiar church that has sunken into the ground. The site of this church is most dramatic.

As you are walking back to after the graveyard you find will be in full view of a small hill that has a church standing at the top of it. This is the smallest church in Ireland and is set in beautifully scenic spot. There is a track leading up to this church and it take around twenty minutes to walk up to. It also has a romantic element to it with its isolation standing over the southern part of the island.

This is perhaps one the best walks ever designed by nature. Starting at Kilronan Village you will walk to the bar of Joe Watties. This is likely where you will end up for a traditional music session at the end of the walk. Turn right down the road., This is actually known as the forest of Aran as its the only area that has a lot of trees in one area. As you are walking down you will see the 12 pins of Connemara in the distance across Galway bay. The first stop is a monestary of the Tempahll Mainistir. This is about 30 mins after the start of the walk.

At this point the sight of Dun Aonghasa comes into view. This is where the walk will take you to. As you are walking, the lower ridge area will come next to the seal colony which is just past the island’s only lake which has swans in it. The sight of Kilmurvery beach will come into view which is another 10 mins.

Once at the Kilmurvery beach, just follow the sign posts to Kilmurvery craft village and Dun Aonghasa. Once spending around an hour in this incredible place, you maybe ready to go off the beaten track completely. On the way down, go over one of the stone fences and walk down along the cliff face. This is a particularly dramatic scene. You will see the view of Dun Aonghasa all the way and its cliff face front on.

The waves also come up to the top of these cliffs on a blustery day and the cliff is 300 ft high so its quite dramatic. On a really rough day the waves go to the top of Dun Aonghasa as well.

If you keep walking down below on the cliffs you can see the worm hole. This is a very peculiar sight and completely made by nature. If wish to walk down to the bottom follow the the walk down to the lower ridge.

From here its walk up to the lighthouse which is at the highest point of the island and has dramatic panoramic views of the Islands and Galway Bay. It is in sight the whole way and its a matter of weaving your way through the thin roads up until you reach the lighthouse. Once you have visited the lighthouse you walk down to the road and then follow it back to the village.