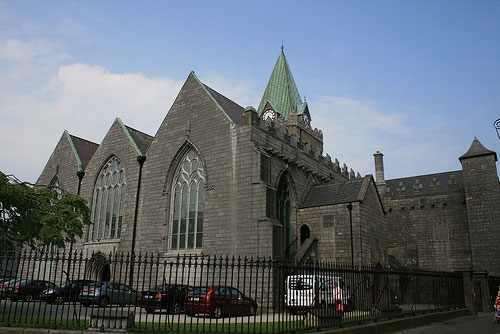 The Collegiate Church of St. Nicholas is the largest medieval parish church in Ireland in continuous use as a place of worship. It is located in Galway in the Republic of Ireland and was founded in 1320, dedicated (like many other European churches in seaports) to Saint Nicholas of Myra, the patron saint of seafarers. The church now belongs to the Church of Ireland.

The church was raised to the status of a collegiate church by letters under the seal of Donatus Ó Muireadhaigh, the Archbishop of Tuam, on 28 September 1484, the same year in which Galway was granted a Royal Charter and given mayoral status. The granting of collegiate status was confirmed on 8 September 1485 by papal bull issued by Pope Innocent VIII (Super Dominicum Gregem). Both events were commemorated in the Galway quincentennial year, 1984.
The Wardenship of Galway

The granting of collegiate status in 1484 required that the City of Galway and some surrounding parishes be severed from the Archdiocese of Tuam. The priests of the city were constituted into a College of Vicars, the senior of whom was to called the warden. The warden, a position and title unique in Irish ecclesiastical history, was the spiritual leader of the city and was entitled to wear attire traditionally associated with a bishop (such as the mitre and crosier), while not having the power of ordination. The warden and eight assisting vicars choral were elected every year in August by the mayor and members of the Corporation (city council) as then constituted. The warden presented himself for election every year; there was to be an election for the post of vicar only when there was a vacancy. The vicars were elected from the secular clergy, for life. The clergy were to be learned, virtuous and well-bred, and were to observe the English rite and custom in the Divine Service.

At first only the city and the parish of Claregalway constituted the wardenship. However, by the end of the century, the parishes of Oranmore and Maree, Oughterard, Rahoon, Moycullen and Skryne were included. The Archbishop of Tuam retained some vaguely defined visitation rights. The Protestant Reformation saw the creation of two wardenships—the official Anglican Wardenship and an underground Roman Catholic Wardenship. These Wardenships continued until the early 19th century. The Anglican Wardenship was discontinued by the Church of Ireland and replaced by the parish of Galway under the care of a rector, while the Roman Catholic Wardenship was discontinued by the Holy See and the city and a large area of its hinterland was reconstituted as the Diocese of Galway.
Historical notes

Over the centuries St. Nicholas’s has played a central role in the life of the city. For many years the triennial elections of the mayor and corporation (city council) were held within its walls. Only male members of fourteen select Galway families, known as the Tribes of Galway, had suffrage.

Local legend states that Christopher Columbus worshipped there when he visited the city in 1477.
Modern times

In September 2002 the Collegiate Church attracted controversy when it was the scene of the first public same-sex marriage in an Irish church. The Avowing Friendship service for a lesbian couple, it was reported, was conducted by the rector, the Reverend Patrick Towers, in September 2002. The Bishop of Tuam, Richard Henderson, prohibited any further services of this kind, and Towers agreed to abide by this ruling.

The church was used for Catholic Mass by the congregation of St Augustine’s Church during the refurbishment of their church between April and December 2005. This generous act cemented good local relations between the Church of Ireland and the Roman Catholic Church. The church is regularly used for worship by the Romanian and Russian Orthodox Churches, and the Malankara Mar Thoma Syrian Church.

The Reverend Patrick Towers was succeeded in July 2009 by Archdeacon Gary Hastings as Rector of St. Nicholas’. Archdeacon Hastings is a well-known Irish traditional flute player, and author of With Fife and Drum, a study of the Orange Lambeg and fifing traditions of Ulster. He has played with the Chieftains, and plays with Fr. Séamus Quinn on the CD Slán le Loch Éirne.