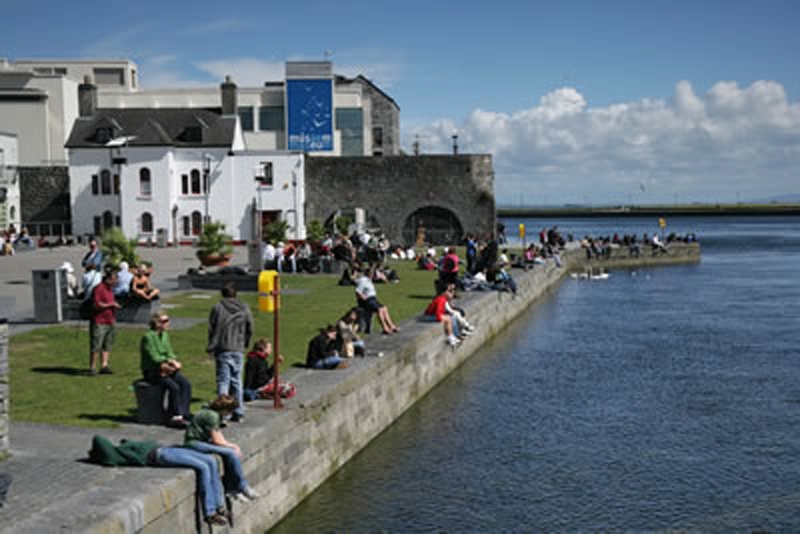 The Spanish Arch is one of Galway’s most historic landmarks it is located on the East Bank of the River Corrib Estuary, where the river meets the sea. Medieval Galway was almost completely enclosed by massive walls, however, the dock area near the Spanish Arch, was at that time, outside the walls. While the Arch’s origins are lost in history, It is believed that it was built in 1584 and was part of the city walls, built to protect merchant ships from looting. A medieval map of 1610 shows a rectangular fort at the location, which was known as Ceann na Bhalla (end of the wall).

The Arch leads to the “long Walk” where in times past, Galway Gentry strolled. It got its name “The Spanish Arch” because of the frequent visits of Spanish ships that came to trade in Galway. The Spanish Arch consists of two arches. One was known as the Blind Arch.

At the front of the Arch is the historic Fish market area, adjoining Spanish Parade. Here the Claddagh women folk came to sell the catches of fish caught by the Claddagh fishing fleet. A wooden sculpture by Claire Sheridan who lived in the adjacent building during the 50s now adorns the Arch.

Beside the Spanish Arch is now the City Museum which houses a cross section of Material relating to live in Galway over the centuries. The Claddagh (an Irish word meaning strand) is located directly across on the west bank of the river, and it was a fishing village where the people spoke Irish and dressed in traditional costume and lived their lives apart from the
city of Galway. They socialised and married people from other Gaeltacht ereas. The old houses were knocked down and rebuilt in 1934 but the same families are living there for generations although now they have lost the old traditional ways and all speak English. Sometimes they married Spanish sailors so there are many families there with raven black hair and beautiful brown eyes!