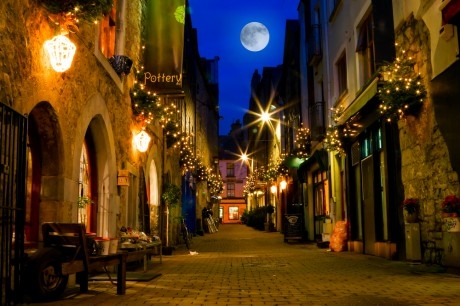 Kirwan’s Lane contains many relics of 16th and 17th century architecture. It is located in the centre of the area that was originally within the city walls, and is named after one of Galway’s fourteen “tribes” – the families who ruled the town for several centuries. Its complete restoration has pumped life back into the heart of the historical town centre. Now home to cafes, restaurants and craft-shops, the lane captures the atmosphere of old Galway.

Galway’s most important medieval street is home to Busker Browne’s Pub which contains part of the ‘Slate Nunnery’, given to the Dominican nuns in 1686 by John Kirwan. Further down the lane is were Wolfe Tone played in the little theatre founded by ‘Humanity’ Dick Martin in the 18th century.

The Lane, which stood in ruins for many years, has been recently revamped and restored to its former splendor. It was here in the late 18th century that Richard Martin built a 100 seat theatre for his wife. The theatre saw many acclaimed performances in its day, and among those to tread the boards were the rebel patriot, Theobald Wolfe Tone, Richard Martin himself, and his wife. Other notable buildings on the Lane were two nunneries. Kirwan’s Lane is now home to a number of unique craft shops, including Design Concourse Ireland, which features the best of Irish craftwork.