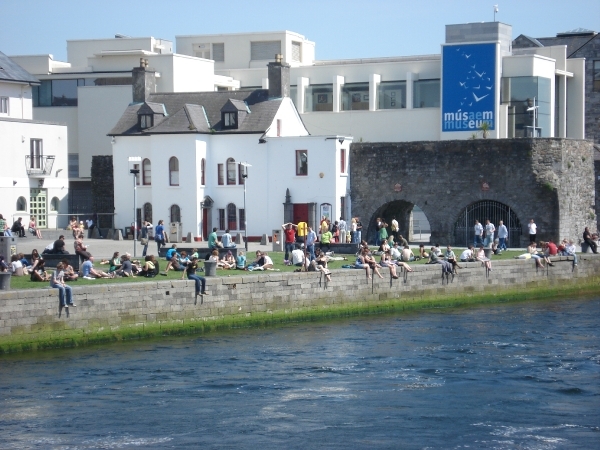 In April 2007 a new purpose built museum building was opened, behind the site of the old museum at Comerford House. The new Galway City Museum project was the initiative of Galway City Council to advance the cultural and heritage life of Galway City. The building was designed by Ciaran O’Connor and Ger Harvey, architects with the Office of Public Works, who were contracted by the Galway City Council. The new museum is located along the River Corrib beside the Spanish Arch, a protected monument which formed part of the defensive medieval wall that once surrounded the city of Galway. The design of the building creates a plaza or square between the museum and the Spanish Arch; a public space which is at times used for civic events.
Partial View of the Galway City Museum from the Spanish Arch

The plan of the museum is composed in an ‘L’ shape and was restricted to three levels in order to maintain the scale of the surrounding buildings. The project was completed in 2006 and resulted in a space of 2,100 meters squared with a final cost of €6,890,000. The architects of the building won the Bank of Ireland Opus Architectural Award for their design in 2006.
Galway City Museum Today

The museum today hosts a variety of permanent and touring exhibitions. The permanent exhibitions include; Routes to the Past (Pre-Historic Galway); Galway Within the Walls (Medieval Galway); Pádraic Ó Conaire: Man and Statue;Dance Hall Days; Cinema in Galway; and Galway and the Wars of Empire. Temporary exhibitions have included; Jack B. Yeats’, ‘Between Art and Industry’ and ‘Uisce agus Bheatha/ Water and Life’, an exhibition regarding the heritage of people, places, boats and water.

Galway City Museum collects, perserves and displays materials relating to the history of Galway City; Archaeology, Art, Geology, Natural History, Social, Political and Industrial History and Folklife. The museum began as a collection of medieval stones acquired by artist Claire Sheridan of Comerford House and, over the years expanded to include general folk life, industrial and militia objects.