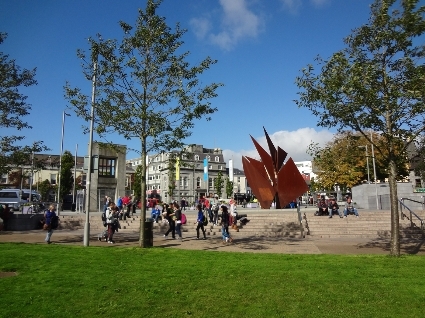 John F. Kennedy Memorial Park is an inner-city public park in Galway, Ireland, formerly officially named Eyre Square (Irish: An Fhaiche Mhór) and still widely known by that name. The park is within the city centre, adjoining the nearby shopping area of Williams Street and Shop Street.

The park is rectangular, surrounded on three sides by streets that form the major traffic arteries into Galway city centre; the West side of the Square was pedestrianised in 2006.

The origin of the square comes from medieval open space in front of town gate, known as The Green. Markets mostly took place in the northern part of the space. The earliest endeavour to glamourise it was recorded in 1631. Some ash-trees were planted and the park was enclosed by a wooden fence. The plot of land that became Eyre Square was officially presented to the city in 1710 by Mayor Edward Eyre, from whom it took its name.[1] In 1801, General Meyrick erected a stone wall around the square, which was later known as Meyrick Square.[2] In the middle of the 19th century, the whole park underwent a redevelopment in Georgian style. In the 1960s, a full-scale reconstruction started and iron railings were removed and raised around the backyard of St. Nicholas’ Church, and in 1965 the park reopened with a new name.

In 1965, the square was officially renamed “John F. Kennedy Memorial Park” in honour of US President John F. Kennedy, who visited Galway city and made a speech in the square on June 29th, 1963. A redevelopment of the square began in 2004.[4] There was some controversy when it was reported that the building contractors had left the site and were not returning.[5] The square reopened on 13th April 2006 having cost €9.6 million to redevelop. The finished square received the Irish Landscape Institute Design Award in 2007.

In October 2011, Occupy Galway began in Eyre Square as part of the global Occupy Movement.
Statues and attractions
Fountain depicting Galway Hookers in Eyre Square with Browne doorway in background

The park used to house two large, cast-iron cannons which were presented in recognition of the service of the Connaught Rangers, an Irish Regiment in the British Army, in the Crimean War.[8] A statue of Irish language writer Pádraic Ó Conaire was erected in his memory in 1935.However, during the redevelopment works, this was removed and it now resides in the new Galway City Museum in the Spanish Arch area of the city. There is a portrait bust of U.S. President John F. Kennedy in the park.

The Browne doorway is also another attraction in Eyre Square as it was originally the doorway of the Browne family’s home on Lower Abbeygate Street but it was moved in 1905 from Abbeygate street to Eyre Square.
References