Located on the 300ft cliff side or south side of Inismór, It is a semi circular stone fort over looking the Atlantic with daunting and dramatic views that stretch the length of the Island.

Dun Aonghasa is deemed to be one of the best examples of its kind in Europe. Archaeologists, scholars and tourists come here from all over the world and it is likely to be given the official status of a world heritage site in the near future. Most people cycle to Dun Aonghasa from the pier and this cycle to Dun Aonghasa has become an attraction in itself due to the electic mix of attractions along the way

A 14 acre site the fort consists of three terraced walls surrounding an inner enclosure containing a platform on the edge of a three hundred foot high cliff. The views from it are breathtakingly spectacular. Excavations carried out in the 1990s indicated that people had been living at the hill top from c.1500 BC with the first walls and dwelling houses being erected c. 1100 BC. A remarkable network of defensive stones known as a Chevaux de Frise( c.700bc) surrounds the whole structure.

Late Bronze Age objects such as rings, tools, beads and foodstuffs found on site are now in the National Museum Dublin. Some scholars suggest that the platform overlooking the vast Atlantic ocean may have had ritual significance. There is a first class interpretive centre attached to the site at Cill Mhuirbhigh, (Kilmurvey Village). It is protected and managed by the Office of Public Works. Entrance Adults €2.00 Students€1.00, Seniors €1.25 and Families€5.50. Guided tours are available free of charge on request.

The Dun Aonghasa Visitor Center is located on the edge of Kilmurvey Craft Village and provides a wealth of information about Dun Aonghasa, the Cliffs,  and The Aran Islands in general. It has a number of presentation outlets and informative educational materials which are set out in a very simple way as so most people can get a good understanding of Dun Aonghasa without the trappings of modern technology you often see advertised. It blends in nicely with the experience and the friendly staff at the centre are always on hand to help you with any questions you may have.

Who Aongus was is unknown. According to legend , Aonghas belonged to a high ranking dynasty who were displaced from their lands in Co. Meath in the early centuries AD. Another possible candidate, is Aonghus Mac Natfraich, King of Cashel in the 5th Century AD, who had dynastic affilliations with Aran. 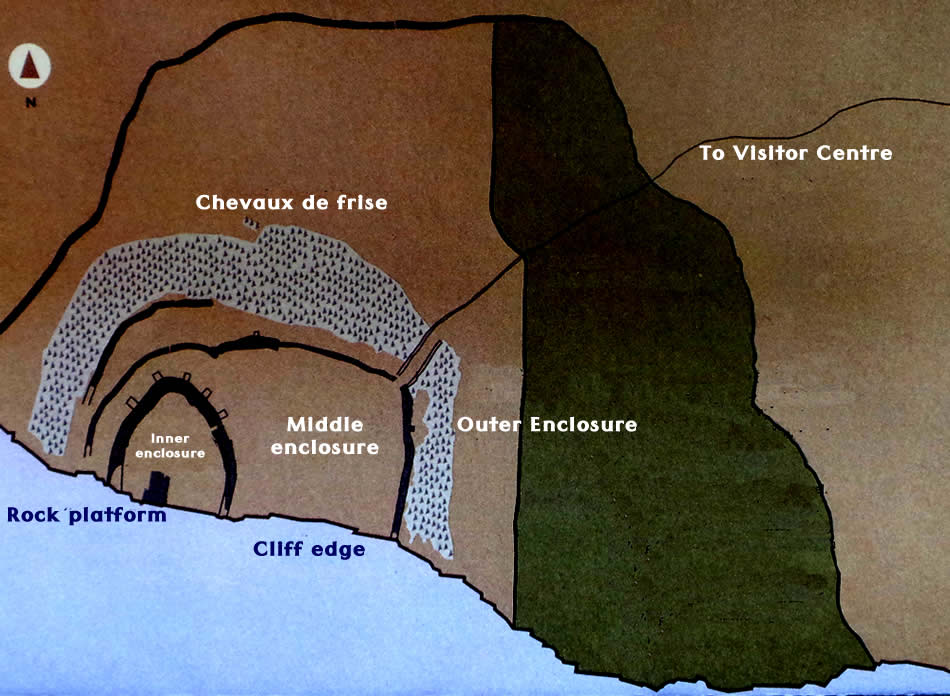 Recent excavations by a team from the Discovery programme found evidence for human activity on the hilltop stretching over two and half thousand years (ca. 1500Bc – 1000 AD). First enclosed ca. 1100 BC , the most dynamic period in the history of this hillfort was around 800BC. At that time, Dun Aonghasa was probably the political, economic and ritual centre for a group of people with a common ancestry. Only the elite members of this group would have lived in the fort. After 700BC, the importance of the site waned and, over the the following thousand years, it seems to have been occupied only intermittantly. A major rebuilding programme was undertaken in the early Medievel period (500 – 1000 AD) but the fort was abandoned shortly afterwards. Dun Aonghasa became a National Monument at the end of the 19th century and was extensively repaired shortly afterwards. It is now conserved by the Office of Public Works. 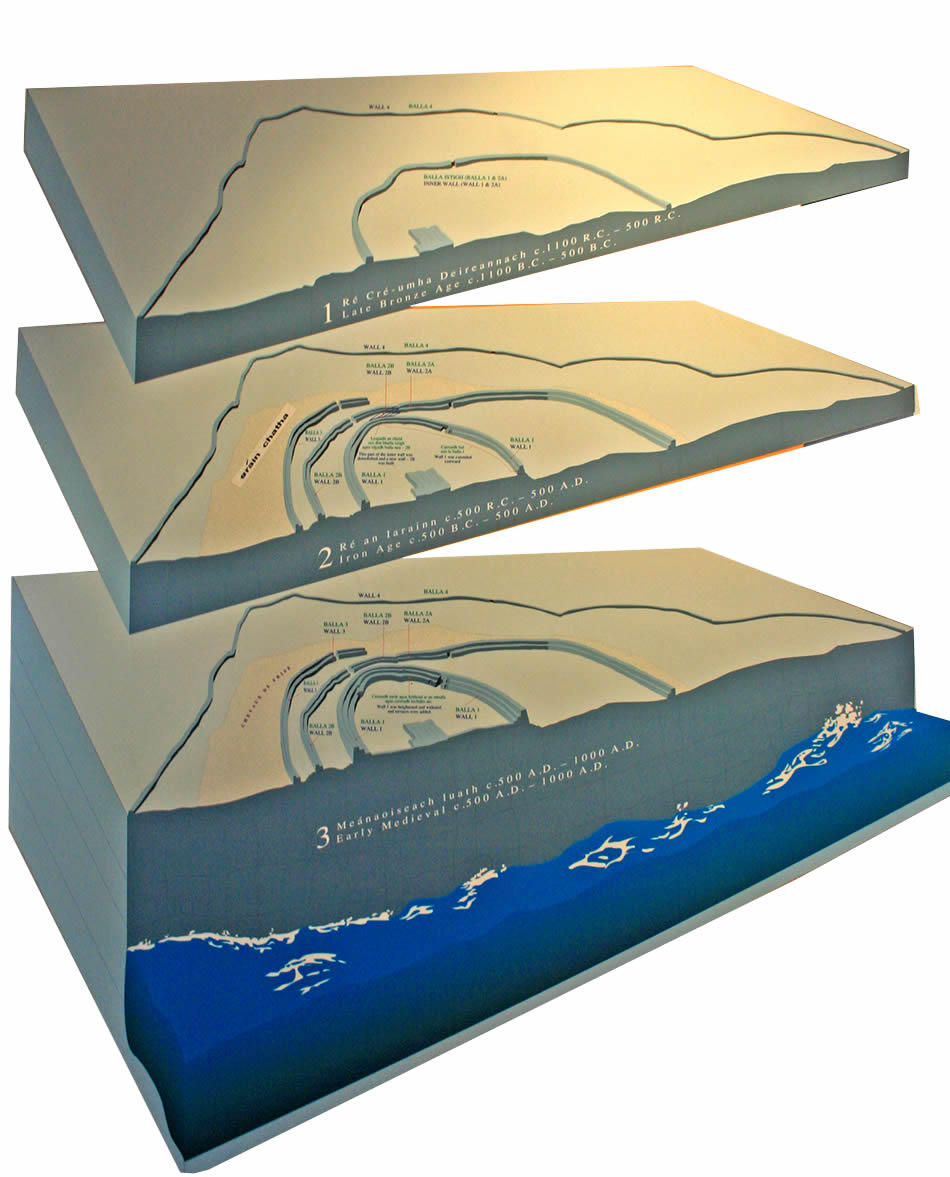 The late Bronze Age hillfort
Covering an area of 5.7 hectares (14 acres), the interior of the hillfort is divided into an outer, middle and inner enclosure by three curvilinear walls terminating at the cliff. An additional stretch of wall runs along west side and, when the fort was occupied, there was probably a ‘safety wall’ along the cliff-edge . Outside the middle closure is a broad band of chevaux de frise (closely-set stone pillars) that even today are difficult to negotiate.

The original approach to the fort was from the north and the main entrances through the outer and middle walls face in this direction. Today, the entry point is through a breach in the outer wall, but the original doorway can be seen at some distance to the right. 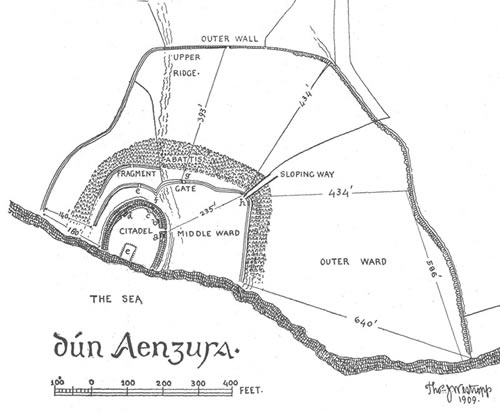 Middle Enclosure
The original doorway to the middle enclosure, about 50m to the right of the present entrance, is now blocked up because of the poor condition of the roof lintals. The entrance would have been closed off by a wooden gate and the sudden drop inside the threshold was probably designed to trip any unwanted visitors. The bodies of two young men were interred in the paved entrance around 1000 AD. These may have had Viking connections, but there was no evidence to suggest that they died violently. 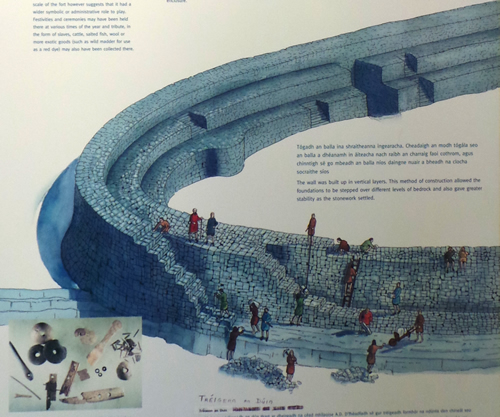 Inner Enclosure
The inner enclosing wall measuring 5m in width, was built up in layers so that the foundations could be stepped over rising ground. Originally, it was probably about 6m high and ca. 6,500 tonnes of stone were used in its construction. The terrace on the interior gave access to the wall top and a small chamber in the west side of the wall may have been used for storng precious or perishable goods.

Lifestyle
The stone foundations of seven houses were found in the inner enclosure. The floors were paved and a number had a stone hearth. The outline of a circular house, ca. 5M in diameter, is still visible near thewest wall. Its foundations are partly covered by the enclosing wall , indicating that the house predates the final alterations to the defences. A stone trough outside the door was probably used either for storing water, keeping shellfish fresh, or for boiling meat using the hot-stone cooking method. In addition to meat and cereals, fish and shellfish were an important part of the diet of the late bronze Age occupants. Almost 8 tonnes of limpet shells were found during the excavations. Most of the tools in everyday use (hammers, axes, whetstones, and quern stones) were made of stones) were made of stone. Clothing was made from wool or leather and fastened with bone pins; the range of needle types found also showed that the Late Bronze Age people used a variety of organic materials.

Ritual
The rock platform at the edge may have had a ritual or ceremonial function and hoard of four bronze rings deliberately buried beside it was probably an offering to a deity. At the opposite end of the inner inclosure, a large hearth seems to have been associated with communal feasting and with the casting of bronze weapons and tools.

Kilmurvery craft village is located at the foot of Dun Aonghas and contains an eclectic mix of Irish Arts and crafts shops. Many visitors to the island browse through before entering Dun Aonghasa.

This has become a huge attraction in recent years due to it being a location for the Red Bull Cliff diving series. It is a natural rectangular shaped pool into which the sea ebbs and flow at the bottom of the cliffs south of Dún Aonghasa on Inis Mór. Access to it is gained by walking east along the cliffs from Dún Aonghasa or more easily by following the signs from the village of Gort na gCapall. This takes only about 15 minutes walk from Dun Aonghasa.