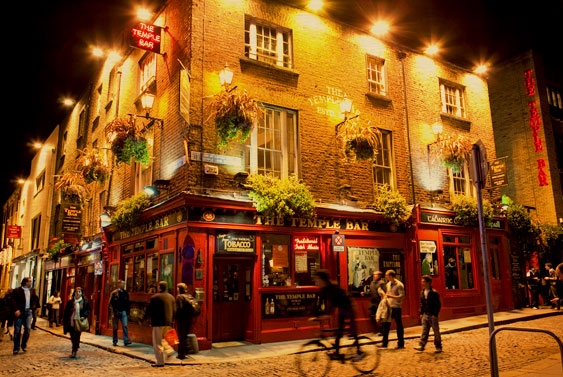 Temple Bar (Irish: Barra an Teampaill) is an area on the south bank of the River Liffey in central Dublin, Ireland. Unlike the areas surrounding it, Temple Bar has preserved its medieval street pattern, with many narrow cobbled streets. It is promoted as “Dublin’s cultural quarter” and has a lively nightlife that is popular with tourists. Temple Bar is in the postcode Dublin 2 (D2), and has an estimated population of 3,000.

The area is bounded by the Liffey to the north, Dame Street to the south, Westmoreland Street to the east and Fishamble Street to the west. It probably got its name from the Temple family, who lived in the area in the 17th century; Sir William Temple, provost of Trinity College Dublin in 1609, had his house and gardens there. However it got its name, the earliest historical reference to the name Temple Bar is on a 1673 map.

Fishamble Street in Temple Bar was the location of the first performance of Handel’s Messiah on 13 April 1742. An annual performance of the Messiah is held on the same date at the same location. A republican revolutionary group, the Society of the United Irishmen, was formed at a meeting in a tavern in Eustace Street in 1791.

During the 19th century, the area slowly declined in popularity, and in the 20th century, it suffered from urban decay, with many derelict buildings. Its unfashionability probably saved it from Dublin’s property developers, who destroyed much of the city’s historic architecture during the 1960s.

In the 1980s, the state-owned transport company Córas Iompair Éireann proposed to buy up and demolish property in the area and build a bus terminus in its place. While that was in the planning stages, the purchased buildings were let out at low rents, which attracted small shops, artists and galleries to the area. Protests by An Taisce, residents and traders led to the cancellation of the bus station project, and then Taoiseach Charles Haughey was responsible for securing funding,and, in 1991, the government set up a not-for-profit company called Temple Bar Properties to oversee the regeneration of the area as Dublin’s cultural quarter.

In 1999, “Stag Parties” and “Hen Nights” were supposedly banned (or discouraged) from Temple Bar, mainly due to drunken loutish behaviour, although this seems to have lapsed.However, noise and anti-social behaviour usually fueled by excessive alcohol consumption remain a problem at night.

After dark, the area is a major centre for nightlife, with many tourist-focused nightclubs, restaurants and bars. Pubs in the area include The Porterhouse, the Oliver St. John Gogarty, the Turk’s Head, the Temple Bar, Czech Inn (in the former Isolde’s Tower), the Quays Bar, the Foggy Dew and the Purty Kitchen (formerly Bad Bobs).

Meetinghouse Square, which takes its name from the nearby Quaker Meeting House, is used for outdoor film screenings in the summer months. Since summer 2004, Meetinghouse Square is also home to the Speaker’s Square project (an area of Public speaking) and to the Temple Bar Food Market every Saturday.

The Cow’s Lane Market is a fashion and design market which takes place on Cow’s Lane every Saturday.

Part of the 13th century Augustinian Friary of the Holy Trinity is visible within an apartment/restaurant complex called “The Friary.”