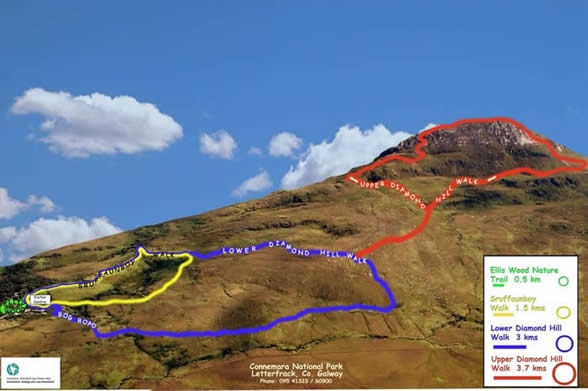 Connemara National Park (Irish: Páirc Naisiúnta Chonamara) is one of six National Parks in the Republic of Ireland that are managed by the National Parks and Wildlife Service of the Department of the Arts, Heritage and the Gaeltacht. It is located in the west of Ireland within County Galway.

Connemara National Park was founded and opened to the public in 1980. It features 2,957 hectares of mountains, bogs, heaths, grasslands and forests. The entrance is situated on the Clifden side of Letterfrack. There are many remnants of human civilization within the park. There is a 19th century graveyard as well as 4,000 year old megalithic court tombs. Much of the land was once part of the Kylemore Abbey estate.

Western blanket bog and heathland are the most common vegetation of Connemara National Park. The boglands are situated in the wet low lying environments whereas the blanket bog exists within the drier mountain atmosphere. Purple moorgrass is the most bountiful plant, creating colorful landscapes throughout the country side. Carnivorous plants play an important role in the park’s ecosystem, the most common being sundew and butterworts trap. Bogs hold very little nutrients so many plants obtain their energy from the digestion of insects. Other common plants include lousewort, bog cotton, milkwort, bog asphodel, orchids and bog myrtle, with a variety of lichens and mosses.
Fauna

Mammals are often difficult to find, but are present nonetheless. Fieldmice are common in the woodlands, whereas rabbits, foxes, stoats, shrews, and bats at night, are often sighted in the boglands. Red deer once roamed Connemara but were extirpated from the area approximately 150 years ago. An attempt was made to reintroduce red deer to Connemara and a herd was established within the Park. Nowadays, the largest mammal in the Park is the Connemara pony.