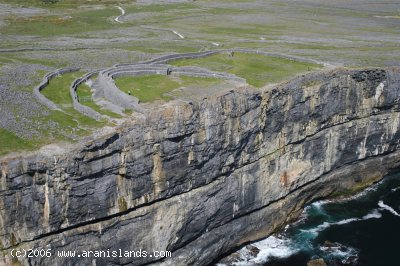 The Aran Islands are located just 20km off County Galway in the West of Ireland. Inis Mor which has a population of 800 left me thinking I not only had an island escape from the kaos and distractions from day to day living on the mainland, that I had been somewhere very beautiful, very unique, and very Aran.

A ferry goes to Inis Mor island from a picturesque port in Connemara where you will see the local fishing boats as you board the ferry surrounded by connemara’s 12 pins. The double decker bus trip from Galway is equally as scenic with its coastal views of Galway Bay and the introduction to the region of Connemara. A boat also leaves from the cliffs of Moher each day. And one can also fly there in 7 minutes if they wish.

Once at the pier of Kilronan I hired a bike. The cycle to Dun Aonghasa is the most popular way to view the Island which could be described as an outdoor museum of stone monuments, churches and forts.There is a place called ‘The Seven Churches’ . Churches seem to be everywhere. There are monestries, pagan standing stones, beehive huts, and The bronze age fort of Dun Aonghasa (there are three forts on the island) sits on a 300 ft cliff that stretches along the 8km western side of the island. Not only am I on the island of ‘Saints & Scholars’, The view is spectacular, the scene is engelic.

A simple feature, and a sight that lingers is the island itself, the dominant rocky limestone landscape full of small paddocks bordered by walls made of stone that had be stacked by hand. This has a mazelike complexion, many of them have different shaped rocks and patterns from which they were constructed. Each one with its own story. It simply inspired my imagination and took me on a journey where I was at one with myself. I took a lot of photos of these stone walls. And it isn’t just me, books have been written them.

The Islanders also speak Irish. It took me a while to understand their english accent and vocabulary which is poetic, expressive, and metaphorical. Irish itself is full of stories and metaphors so there seems to be a lot interpretation involved, and where a lot of phrases in english are derived from. It adds to the charm and authenticity of the experience.

Aside from my highlight which was Dun Aonghas and the cliffs, I discover an eclectic mix of interesting things. There is a beautiful seal colony, stunning beaches, and exotic wild flowers. A famous film called “Man of Aran” and its cottage. The Aran Sweater Market. The Worm Hole which is the venue for the Red Bull Cliff Diving. There is 3 lighthouses, There is great traditional Music and lots of musicians. The food is superb such as Aran Cheese, and there is the Island Energy co-op!!.

The island has you leaving it thinking you had been somewhere special. Not only that you had left the hussle and bustle of the mainland; You get that “island” energy!!!. Rarely do I feel ‘effected’ just by being in a certain place.