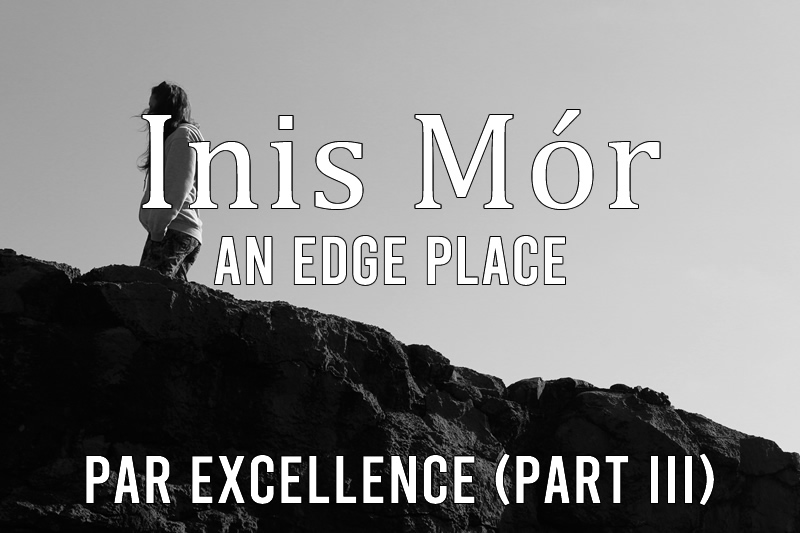 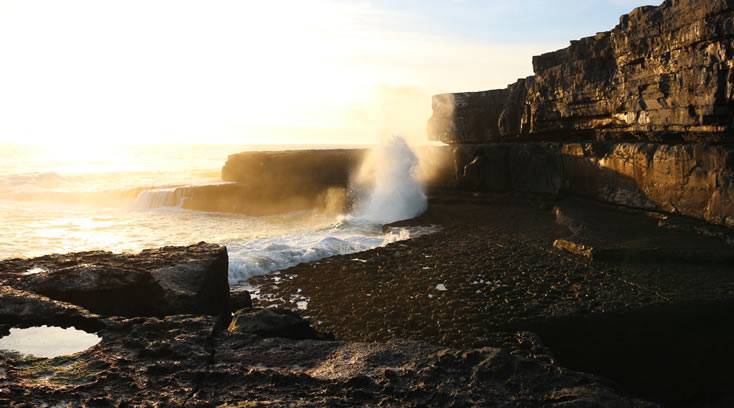 While there are many astonishingly beautiful places in Ireland, there’s just something intangible about the island of Inishmore that defies description. The island has many strata, be it cultural/ historical, archaeological, mythological and, certainly, spiritual. All of it enchants and titillates me.

Hence the word, Topophilia. Simply stated, it means love of place. Did I mention I love it here? The reader will also notice that landscape, seascape and skyscape all have a common genus: scape, or it’s original, scopia. The word implies a visual experience. But there’s much more here than this. 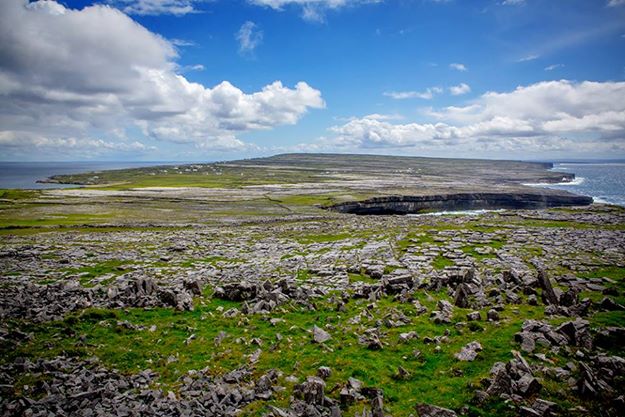 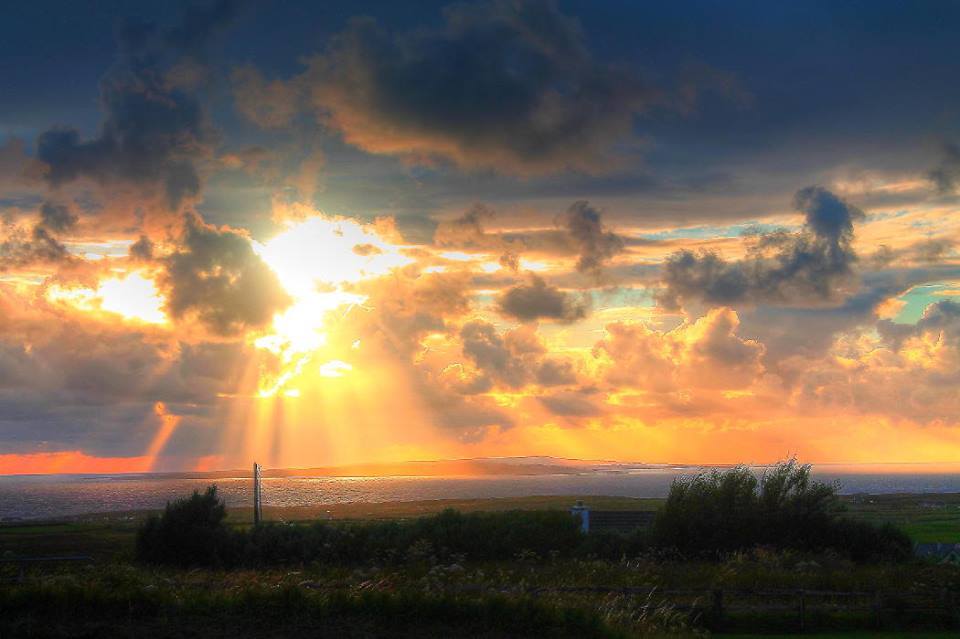 Taken together, and irrespective of weather conditions, these visual experiences fuze into one massive creation-symphony. It is truly something to behold – and to be held spell-bound by.

But is that all? I think not.

Inishmore is especially important to me, for a number of reasons. Some of these are known, while others are still emerging. The island resonates easily with my persona. It is a kind of matchscape. While I trek around on foot (and occasionally by bike), I spend a lot of time looking down at the land under my foot. And yet, paradoxically, my eye is constantly drawn aloft, to the sky. Ireland does that to you. The experience of this – looking down, while simultaneously looking up – is intoxicating and, on occasion, a bit dizzying. But I wouldn’t have it any other way. Some of us just don’t do well in the city with its mind-numbing busyness. Similar to many of the encounters that Belden Lane talked about in his book “The Solace of Fierce Landscapes”, some of us just need wild, and even fierce landscapes to feed our spirit. The storms we possess in our souls can only be matched to a seemingly wild and inhospitable scopia. So then, Inishmore is my matchscape. 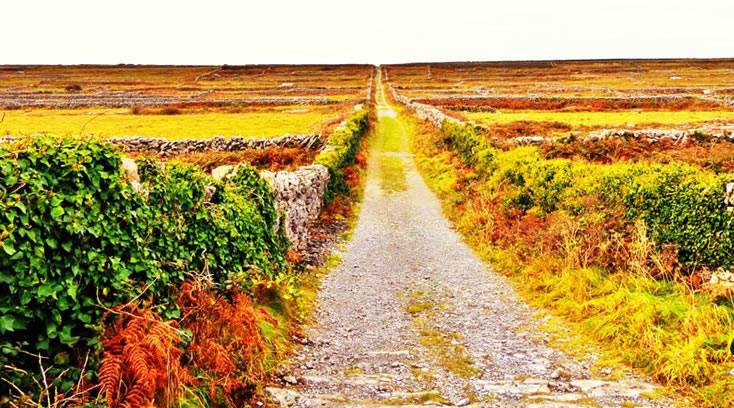 ‘Wild’ Camping With Seals On Inishmore

During this past summer, I spent a ‘bit’ of time (about two months) camping alone in a tent on the southeastern end of the island. I’ll go into more detail on this in a separate blog-post. But to say that the experience was exhilarating would be an understatement. The Islanders were very/very good to me: on occasion bringing crab or lobster, fresh veg, firewood and even a container of Potín. I was certainly an anomaly and, no doubt, a subject of some curiosity. All were friendly and hospitable; I was thus treated very well. Encounters with some of the islanders hold particular affection for me. Two of the children, whilst out traveling with their mam’s, inspired me to begin my fledgling journey into children’s literature.

The first story “The Hero of Ireland”, is about a boy who knew so much about seals, that the President of the Republic even sought out his advice! The second story was inspired by a rather chatty little girl, and is entitled “Saoirse The Selkie”. Based on the original (and traditional) tale of a shape-shifting seal-woman, I’ve changed the ending to a much happier one – for the kid’s sake. What both of these two stories have in common is – seals. Not surprisingly, while I was camping not far from Tramore Beach, I spied seals on many a day.

I’d ‘glass’ them through my binoculars for hours, and wonder at them – boy-like. What fascinating creatures they were to watch! And, on occasion, I’d be awakened in the wee-hours of the morning by seal-pups calling out for their mam’s. I’d listen and laugh, then rollover and fall back to sleep. If this was all I had to complain about, it certainly wasn’t much. Them seals sure are funny!

In Part II, I wrote about the importance of ‘art’. Back where I’m from, I remember spending many hours gazing at the artwork of one of my favorite artists, Tom Thomson. Whilst at the national art gallery, I would examine in painstaking detail his many paintings. His painted vistas remind me a lot of my views out over Inishmore – the bottom third is land, while the top two-thirds is sky. Seen from this perspective one gets to experience the works of The Master Artist. Thomson, like so many other artists was simply ‘taking dictation’ – alot like one of my favorite American movie directors, Terence Malick. Though Tom Thomson would later commit his efforts to large canvas works, it was his smaller pieces that really enthralled me. As Thomson was a true wilderness man, these smaller works were initially painted on to ‘beaver boards’ – small 10 x 12 bits of flattened beech wood – with the intention of later expanding them onto a larger canvas. It’s much easier, and more practical, to paint mini-tapestries to store away in one’s dunnage, particularly if you’re traveling alone for weeks or months by canoe. Some of Thomson’s ‘beaver-boards’ certainly did make it onto much larger canvasses. However, many, sadly, did not due to his untimely wilderness-death. I suspect one of my mentors, Bill Mason, emulated his life as a canoeist/artist. He demonstrates this in his mid-1980’s canoe-odyssey “Waterwalker” (below). It’s worth a watch.

‘Trekking’ Over Land & Near To Sea

Doing a ‘walkabout’ on Inishmore is both fascinating and exhilarating. Whilst camping near the beach at Tramore, I’d amble across the sphagnum moss landscape, noting the springiness underfoot. It reminded me a lot of traversing the arctic tundra (or taiga) in the summertime. I think of my days with the Inuit (The People) with great affection. I learned from them that sphagnum moss is edible. Fewer still know that, in bygone days, aboriginal people used to put clumps of it into deerskin satchels, and use it for their baby’s ‘nappies’. It’s a useful item. I consider to the erratics left here by the ice-age. I also reflect on the manmade stone fences and consider the things that divide (but do not unify) us as human beings. But then, looked at from a different perspective, I witness shards of light coming through between the rocks on each fence. I suppose it’s a matter of whether one considers the ‘glass’ half-full or half-empty. So, there is hope. But it can’t come soon enough. 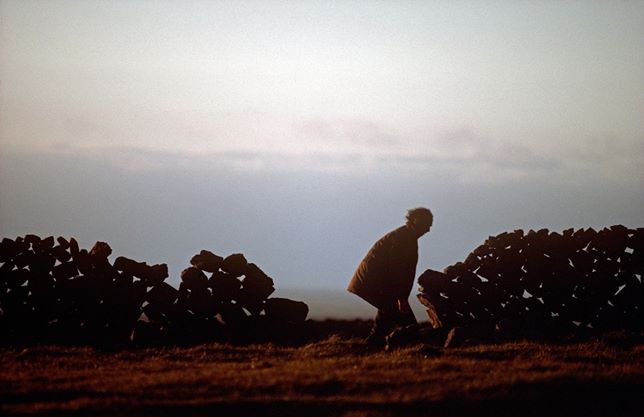 I approach the sea with respect. Sometimes it’s ‘face’ is like that of a man: calm and peaceful one minute, then enraged with anger the next. Even a Banshee-wind antagonizes it on occasion. Fishermen who made this island know this. Some mariners even paid with their lives to do so. But our efforts to humanize (anthropomorphize) nature are, ultimately, fruitless. It is what it is: neutral, yet also charged with the ‘energies’ of God. Staring out over the sea for hours on end, your perspective changes, and you see how really small you are. Yet a sojourn down to the tide’s edge may provide freshness to this viewpoint. I consider the Irish word ‘eicse’. Whether old Irish or new, it holds profound significance for any creative artist. The word means both edge & water. But more poetically, it means that liminal place where water and land meet: neither fully sea, nor fully land. For poets especially, it defies categorization. It’s very existence is subversive and immutable. It is a supreme point/place of inspiration. And so, ‘eicse’ is, in my books, a truly good word. 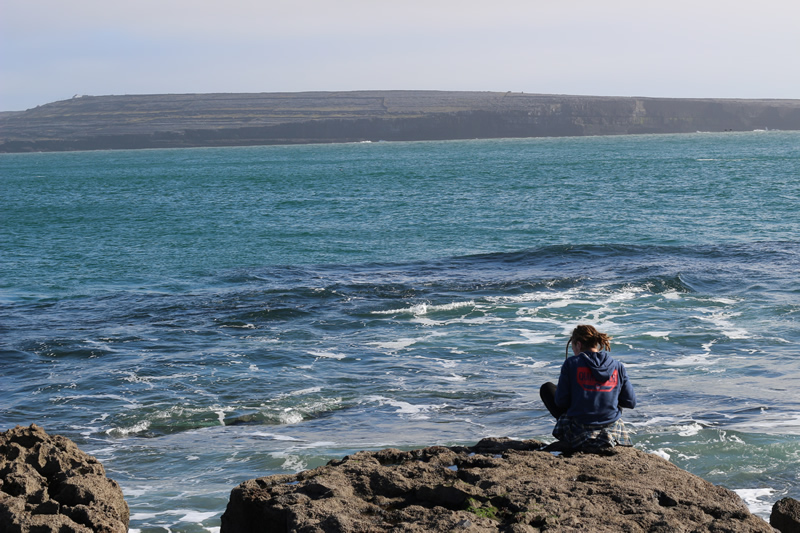 And then, between land and sea, are the birds. Since boyhood, I’ve studied their habits, seasonal flight patterns, their wax and wane of existence. It brought (and still brings) great joy to me. Early Christian monks considered them with great fascination. Their messenger-place, between heaven and earth as it were, was given great reverence. Another ‘liminal’ place to consider. And I reflect, yet again on why they, and I (and you) have come to Inishmore. This impetus was/is centrifugal (moving out from the center) vs. centripetal (moving into the center). So, perhaps, like these early Christian mystics, many of us feel compelled to once again inhabit this world by allowing ourselves to be driven to the margins. As I suggested in my earliest (Part I) blog-post, perhaps we come here to find out who we truly are as human beings. And, not unlike St. Brendan (inspired as he was by St. Ita) we journey here to find new life – even a new world. These are difficult and precarious times, requiring access to storehouses of ancestral wisdom. So if that is what Inishmore does to people, in all it’s ‘wild’ aspects, then that is a truly good and honorable thing. That is what I think.

Cemeteries hold a particular fascination for me, and particularly the one associated with St. Enda’s cill here on Inishmore, at Iardre. I try to visit his church once a week, to deposit what little spiritual pollen I have, and to pay respect to the ones who lay, awaiting their resurrection. It can be a somber, but hopeful vigilance. Then, one day, an islandman – a proper gentleman who once gifted me with potatoes from his very own garden – told me about ‘The Cry Field’ not far from where I was camped. I was astonished by his account of islanders bidding a final farewell to their families and friends as they sailed past, en route to America. What would it have been like to experience this during the 18th/19th centuries, tearfully waving to the ships as they passed, never to be seen again? Does such a field hold and even retain these ancestral memories? I had to go myself to that place, to gaze upon that stretch of water between the islands… I did so, and tried to imagine what it would have been like, seeing loved-ones depart. The pathos was overwhelming, and I’m not ashamed to say that I let a ghostly tear-or-two drop from my eye that day. So many exile-memories…

So many dreams were broken and so much was sacrificed…
Was it worth the one’s we loved and had to leave behind?
~ From ‘Hand of Sorrow’

In my next blog post (Part IV), I’ll be writing about another type of animal – Wolves.
But, again, it’s not necessarily what you might think. These wolves are multi-coloured!
Fancy a bit of ‘tracking’ then? Come along, you won’t be disappointed! ~ S.O.