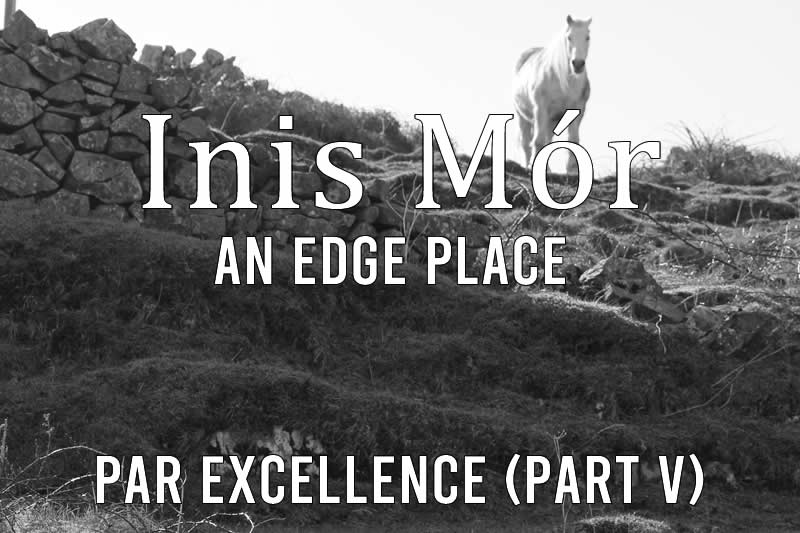 I first visited Inishmore over twenty years ago. Much has changed in Ireland (Eire) and around the world since then. Allow me to introduce myself. My name is Seamus Ó Ríordáin. This, of course, is not my real name, but rather my nom du plume (writer’s name). Identifying myself as such allows me to protect my privacy and preserves a degree of anonymity, plus other things. I’ve worn many ‘hats’, some known, others less so. My present writing vocation is but my latest reinvention.

I love Irish literature, both ancient and modern, and especially her mythological tales. Some years ago, I remember using one of these – the tale of Finn (Mac Cumhaill) and his war-band, afoot on a hunting party – to illustrate to an audience about the importance of The Music of What Happens…

I think Finn must’ve been chasing that elusive-as-ever white stag, the harbinger of finding one’s way into Tír Na N’Og. Roughly re-worded (and I do apologize if I didn’t get this technically right) it goes as follows: One day Finn and his hunt-party were out a-hunting. Upon stopping to rest for a while, a conversation began. Finn put this question to the men who made up his war-band: “What is the most beautiful music in the world?” Each warrior answered in turn. One said it was the sweet sound of a lark aloft. Another said it was the sound of a warrior-spear in flight before it downed a foe.

Still another chimed that it was the whispered entreaties of a lover. Another said it was that of a wee girl’s lilting voice in song. Finn acknowledged all these as being good sounds all. But then one of his warriors enquired of him: “Tell us chief, what to your mind is the most beautiful sound in the world?” After ruminating about it for a moment, the wise old warrior-chief responded thus: “I believe the most beautiful sound in the world is… the music of what happens.” His response still stuns me. Well, after recounting this tale to my captive audience, the room fell silent. They were gobsmacked with wonder. And then, after their mind’s gradually digested it’s truth, the room erupted into spontaneous laughter and clapping. Never underestimate the ‘School of Ah-Ha!’…

Connecting this mythological account to one’s own comological consciousness has taken some time. Many more learnéd men and women than I have helped to point the way. I think of Barry Lopez’s book “Arctic Dreams: Imagination and Desire In A Northern Landscape”, but also Hugh Brody’s important work “Maps & Dreams”. In this latter book, the ethnographer-author provides in-depth accounts about how hunter-gatherer peoples find their prey to sustain their families – not unlike Finn and his hunt-party. In any event, Brodys’ findings were both spectacular and unsurprising.

On the one hand, he documents how aboriginal people dream where their quarry will be the night before and, with astonishing accuracy, later have a successful hunt. They literally dreamt of success. On the other hand, when asked how they located the animals, they respond that they ‘thought’ the animals – not unlike a traditional fisherman who knows, from experience, where to look for fish. By both accounts, there is something other going on here: the paradox of being lost, then found…

I’m reminded of one of my favorite ‘trekking’ songs, by Avicci called “Wake Me Up”:

This brings me to my own personal account, of why I’m here in Ireland. In a word, I was invited. You see, a few years ago, I was back in my homeland, asleep in my wilderness cabin, beside a lake, named after a white beaver. I do not know if my mind was encumbered with anything in particular, but I do recall it was on the spring equinox, and that the seasonal ‘break-up’ of ice on the lake had begun. At any rate, I had a dream. But it wasn’t any ordinary dream. It was An Aisling. As many know, the ‘Aisling’ is a kind of Irish literature, first popularized by Douglas Hyde. In it, the dreamer encounters the most beautiful woman – both in form and countenance – who reveals herself to be none other than the embodiment of Ireland herself – Eriu. All that to say that I have never had – before or since – such a profound sense of being loved and belonging in my whole life. She was both the perfect lover and perfect mother. I’m sure the Jungian psychologists would have a field-day with that one! Nonetheless, as I slowly awoke with the trace elements of the Aisling still in my soul, in one last desperate attempt to understand, I enquired of her: Who are you?!? As she slowly walked gracefully away she paused, then turned, and said ‘Eriu’. Upon fully waking – and after a cuppa coffee or two – the significance of my Aisling, together with her response – slowly dawned on me. Eriu was/is the most ancient name of Ireland. I had just received a personal invitation…

So now, back to the temporal, so-called ‘real’ world. I’ve spoken truthfully that I’m a pilgrim. But that word, and more specifically ‘peregrinus’ has multiple linguistic layer-meanings. Apart from the obvious, the word connotes the following: wanderer, sojourner, outlander and, ultimately, exiled. So, unlike other mere travelers, we pilgrims (peregrini) travel differently – in search of a spiritual goal. After all, it’s better to travel hopefully, than to claim you’ve arrived. Otherwise, what’s the point in journeying? My arrival (if it be that) also has a history. What man, after all, doesn’t have one of these? I’ve worn many ‘hats’.

For over twenty years, I was a soldier and later, an operative – both as an NCO and officer. During that time-frame, I visited many places and experienced many things. Suffice to say, I know what conflict is, at many different levels. This doesn’t make me special, much less a hero. It was just my job. But to use Moby’s name-song, the ways I experienced were often extreme, and some quite dangerous.

If one wanted to go looking for ‘action’, then we certainly found it! Adrenaline was our preferred drug. After being honorably discharged from the military, I went on to become a wilderness instructor and guide, which I enjoyed very much. I even did post-graduate work and studied the spiritual aspects of Celtic (mostly Irish and Welsh) literature. Johannes Scotus Eriugena was one of my favorites. It was a rich experience, allowing me to visit the lovely isle of Eire for the first time. It was life-changing.

Then 9/11 struck, and I was called back to assist my government, albeit as a consultant/contractor. I probably shouldn’t have. But, in the melee that was fast approaching, it seemed the honorable thing to do – especially given that our troops were being put in harm’s way on foreign soil. All was relatively well until, one day, my world fell apart. For seven years,

leading up to my arrival here in Eire in 2019, I was ‘sought’ by my government, for things wrongly claimed, and which I had no part of. My previous training/experience as a shadow-warrior was much needed, and on occasion used. Without going into details, much less dramatics, I endured the full force of their entire apparatchik. It cost me and my family dearly, and nearly led to my demise on more that one occasion.

It was a not-so-private hell. To put it simply, if I were a cat, my collective life experiences have likely caused me to use up eight of my nine ‘lives’ by now. Like I said, looking for ‘action’ is one thing – until the day it comes looking for you! And so, I’m still a bit haunted by my past, something akin to a ghost.

But I’m here, now, in Ireland. And, as my dear mother often reminded me, “hope springs eternal”. And so, it does. Thus, my presence here in Eire, and on Inishmore in particular, is an expression of the purest desire: to find new life, to give/have new love, and ultimately to live in peace with all those around me. To use T.S. Eliot’s ‘Little Gidding’, I now stand at the mystical ‘still point’, where the dance is… To what extent my desires are realizable, I do not know. But I’ll simply leave that to the Grace & Will of Almighty God. So, we walk by faith, and not by sight…

On the last winter in my beloved homeland, I spent one evening with a friend in front of a wood-burning stove, quietly chatting. She turned and asked me most pointedly, “What kind of man do you want to become now?”. I responded that I wanted to be – what the Irish call – ‘a lovely man’.
So, maybe, I’ve become a lovely man. But then, maybe I already was – and just didn’t know it.

To The Blesséd Islanders of Inishmore

As my time for departure is fast approaching, I wanted to leave a brief note for the many wonderful Islanders of Inishmore who’ve extended to me such gracious hospitality and understanding.
Thank You and Beannacti Agat!

Let me now close by offering back… something… I wrote, about my beloved son (aka ‘The Josher’):

My beloved boy espied a butterfly,
quietly resting on a sun-baked rock
along that lake-edge of the White-Beaver.

Guilless and innocent, he wondered at the quiet Monarch
Then, ever so gently, proffered her his little finger.
And she reciprocated, slowly offering her his trust, and life.

And my lovely son, hair shining, smiled.
Not knowing her name, he inquired of me, his Da(d).
Thinking then of the first Adam’s animal name-titles,
I foolishly exhorted him: “You name her son.”

And he, not fully comprehending, was in awe,
but named her nought, and simply let her be…
Staring then, as now, I became astonished
At the sheer wonder that remains in this passing world.

As for the gentle reader who has not yet ‘connected the dots’ – I’m very proud to say that I’m from The Land of the Maple Leaf – Canada. Here’s to Freedom Convoy 2022 & Freedom for All!

“Bury Me With My Boots On” by Greg Arcade