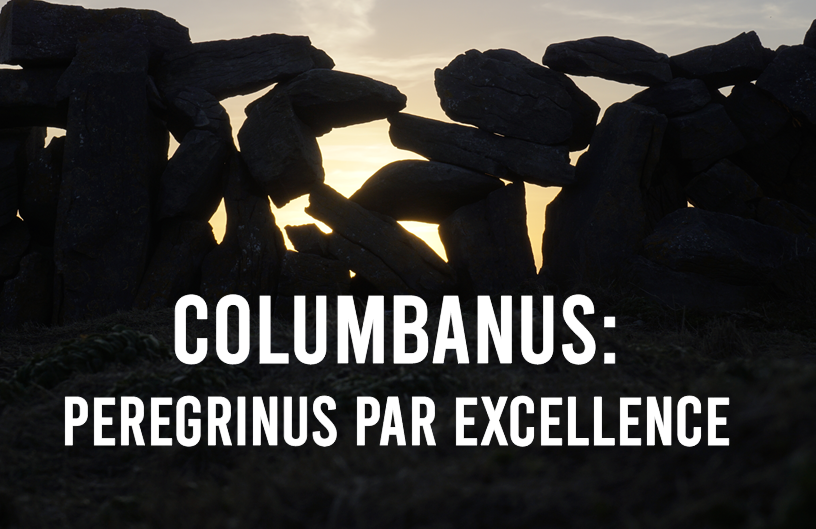 Doing a ‘walkabout’ on Inishmore sure gets a guy to wonder…  Reflecting on the whole ‘journey’ (turas) thing, my mind naturally wanders back in time to Ireland’s not-so-distant spiritual traditions.  Of course, I think of the many holy men who came to this island, some to stay, such as St. Enda whose cill (church) I try to attend on at least a weekly basis.  Others came here only as visitors,  such as St. Brendan.  Maybe I’m in good company, but I dunno.  Then I think of Columbanus.  Now there was a man’s man!

Columbanus (Feast Day: November 23rd) was that great Irish/Celtic Saint known for his ‘pilgrimage for Christ’ (peregrinatio pro Christo). Born near Leinster, Ireland in 540 AD, he was a contemporary of St. Columba (521-597 AD). Columbanus is known for his establishment of a number of monasteries on the European continent. He first began his vocation by placing himself under the direction of Comgall at Bangor. In doing so, he was joining the most austere branch of Celtic/Irish monastic training. After long years of prayer and education, Columbanus and twelve companions left Ireland, probably around 591 AD.

His lifelong and voluntary commitment to exile from his homeland is an outstanding example of peregrinatio pro Christo, or “pilgrimage for Christ”, whereby a monk would voluntarily cut himself off from his own extended family as an act of ascetical discipline. Traveling into (what is now) France, Germany, Switzerland, and Italy, he and his companions established a string of monasteries on the European continent, including Luxeuil, Gallen and Bobbio.  These played a major role in re-igniting the Christian faith during the so-called ‘Dark Ages’. However, the monasteries were but a bi-product of something much deeper: the intoxicating desire for deification.

Unlike many other Celtic monks, he left a number of written works, including a monastic ‘rule’ (the Regula Monachorum) which incorporated the values of silence, prayer, and fasting. It was a general rule though and was mainly concerned with the interior dispositions of the monk and the central tenets of Celtic monasticism. It thus differed from the detailed regulations laid down by the later Rule of St. Benedict. But his ‘rule’ played a considerable role in the subsequent development of other monastic rules, including the Concordia Regularum by Benedict of Aniane.

Courageous, outspoken, scholarly, unyielding, quick to enter an argument severe on his fellow monks and on himself, he could also show great tenderness and write lyric poetry of high quality. His extant sermons incorporated much of his wandering tendencies and were of a deeply mystical nature:

“Human life… you are so fleeting, shifting, dangerous, brief and uncertain … dissolved like a shadow, a mirage, a cloud, a nothingness, or an emptiness. Mortal life is but a way, a shadow … like a dream, we must travel through so anxiously, so carefully, so hastily, that all those with understanding should press on, like wayfarers, to their true homeland, untroubled at what has been and concerned as to what is yet to come…” ~ Excerpt from Sermon Five

Some have called him “one of the Fathers of Europe.”  But Columbanus’ ministry was not so much about buildings (much less infrastructure or parochial institutions); his ministry is a stark reminder to us that (like Abraham), we are people of ‘The Way’ – living in tents, moving ever forward into the mystery of God.   Of all the Irish peregrini on the continent during this period, there can scarcely be any doubt that Columbanus had the most widespread and most lasting impact of any Irish monks.  Establishing his last monastery at Bobbio, Italy, he died (or ‘crossed over the river’) on 23 November 615 AD. (Bobbio later became influential in informing/shaping the Franciscan Order and its legendary love of God’s Creation).

St. Columbanus, we salute you.