My Favorite Place in Ireland: The Wild West – By Andrew McCarthy 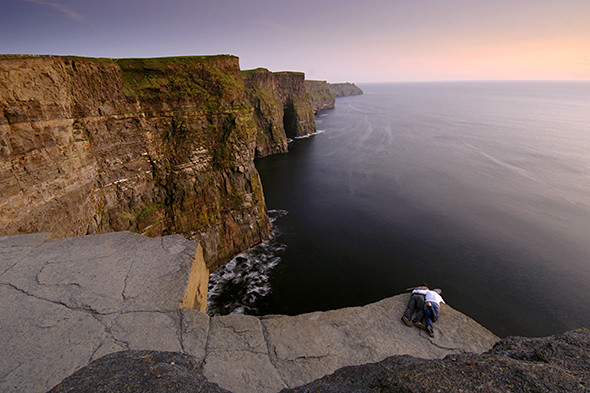 My Favorite Place in Ireland: The Wild West – By Andrew McCarthy

→  → My Favorite Place in Ireland: The Wild West – By Andrew McCarthy

A couple peers over the Cliffs of Moher at the Atlantic Ocean below. (Photograph by Jim Richardson, National Geographic)

An innkeeper, a painter, a bodhran maker.

Almost 30 years ago on a chilly June night I stumbled into Ballinalacken Castle House Hotel in County Clare and came upon a gruff lion of a man with an unruly mop of hair who offered me a country welcome amid peat fires, heavy blankets, and flowing pints of Guinness.

Denis O’Callaghan has endured my comings and goings at all hours, my crashing into his car, my insistent requests for more of his wife Mary’s unmatchable soda bread, nearly every year since.

He has become as much a part of my visits to the west of Ireland as the nearby Cliffs of Moher, the traditional Irish music played in McDermott’s Pub just down the hill in Doolin, or my wind-whipped hikes across the Burren. His site on a bluff overlooking the sea and the Aran Islandsbeyond is a place I return to in my mind on a weekly basis.

A large canvas covered by a roiling blue-green sea led me to find Carol Cronin halfway out on the Dingle peninsula, a craggy finger of unmanicured land jutting out into the Atlantic in County Kerry. Carol’s gallery on Green Street in the town of Dingle is filled with a riot of seascapes—gray, golden, turquoise; some placid, some in turmoil. She can be found there painting—usually barefoot, long brown hair yanked back off her face—on most afternoons. It’s Carol who pointed me to Curran’s, a Main Street pub where the owner/barkeep shared with me crumbling letters of gratitude sent to his grandfather by so many of the people who had fled Ireland during the Great Famine with a few pounds of the elder Curran’s money in their pockets to ease the way.

It was Carol, too, who insisted I go out to the Blasket Islands, the now deserted, treeless outcrops that were home to a few dozen rugged, Irish-speaking people until the mid-20th century. Alone on Great Blasket, amid the handful of derelict houses, under raging wind then lashing rain then burning sun, I spent a day in potent silence that I have never forgotten.

And it was out in Roundstone along the coast road in Connemara that Malachy Kearns told me, “I had a wild call to be by the sea and I couldn’t wish it away.” It explains why Ireland’s premier bodhran maker has secluded himself far from the beaten path in County Galway, and why musicians make the pilgrimage to his seaside studio for his custom-made drums.

An outsize man in every way, with pale blue eyes full of mayhem, Malachy embodies much about this wild, merciless, untamable corner of an already wild and untamed west. Connemara is Ireland’s Ireland, “a different world out here, to be sure.”

For more than a quarter of a century I’ve traveled this coast, up from the filigreed fringe of west Cork, along the lakes of Killarney, to the world-class golf links of Ballybunion and Lahinch, to Yeats country in Sligo, meeting people like Denis, Carol, and Malachy.

Celebrated travel writer, actor, and director Andrew McCarthy is an editor at large at National Geographic Traveler magazine. Follow him on Twitter @AndrewTMcCarthy.